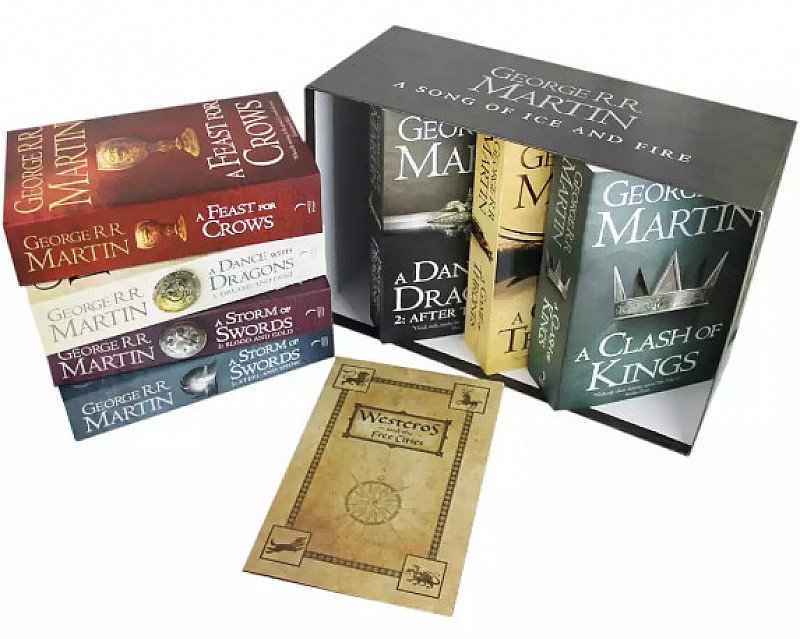 Enter the spectacular fantasy world of Game of Thrones, with this amazing 7 book set.

George R. R. Martin's critically acclaimed 'A Song of Ice and Fire' has become one of the greatest fantasy epics of modern times combining the medieval background with supernatural elements, battles and political intrigue taking place on the fictional continents of Westeros and Essos. The success of these breath-taking books has led onto even greater acclaim for the HBO television adaptation 'Game of Thrones'.

Immerse yourself into a world of political deception, fire-breathing dragons, ancient families and gripping battles. The series follows the growing threat of mythical beings roaming beyond the unnerving ice wall; the civil war and battle between the great families of Westeros for the throne of the Seven Kingdoms; and the ambition of a young, exiled daughter of the slain King, desperate to claim her birth right.

Become totally engrossed in the lives of your favourite characters and how their journey's become woven together, the history surrounding the events unfolding in front of you and the fight for power.

Reviews:
"Of those who work in the grand epic fantasy tradition, Martin is by far the best" - Time Magazine

"Colossal, staggering… Martin captures all the intoxicating complexity of the Wars of the Roses or Imperial Rome" – SFX

"The sheer-mind-boggling scope of this epic has sent other fantasy writers away shaking their heads… Its ambition: to construct the Twelve Caesars of fantasy fiction, with characters so venomous they could eat the Borgias." – The Guardian