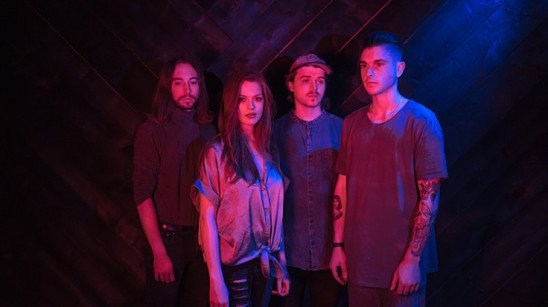 Nighttime psych-pop four-piece Mellow Gang made their wondrous debut last year with their Play EP which received critical acclaim from the likes of BBC 6 Music, Loud and Quiet Magazine, Clash Magazine, London In Stereo and many more. They spent much of their first year playing across the country, this included Oxford’s Ritual Union Festival where they played beside titans of the genre such as Peace, Black Honey, Pinkshinyunltrablast and more.

Brand new single ‘Temps’ showcases a lush soundscape invigorated by the intrepid, evocative production of late 60’s psychedelia. It’s a heady, ethereal sound led by vocalist Harriet Joseph’s husky tenor. She fills the brooding atmosphere with theatrical melancholy, casting haunting shadows across a soundtrack that simmers with tension and obsession. Lana Del Rey comparisons are inescapable when her cool detachment wells up into a wail of emotional anguish, she sounds tragic and beautiful throughout, luxuriating in a bleak space between dream and reality.