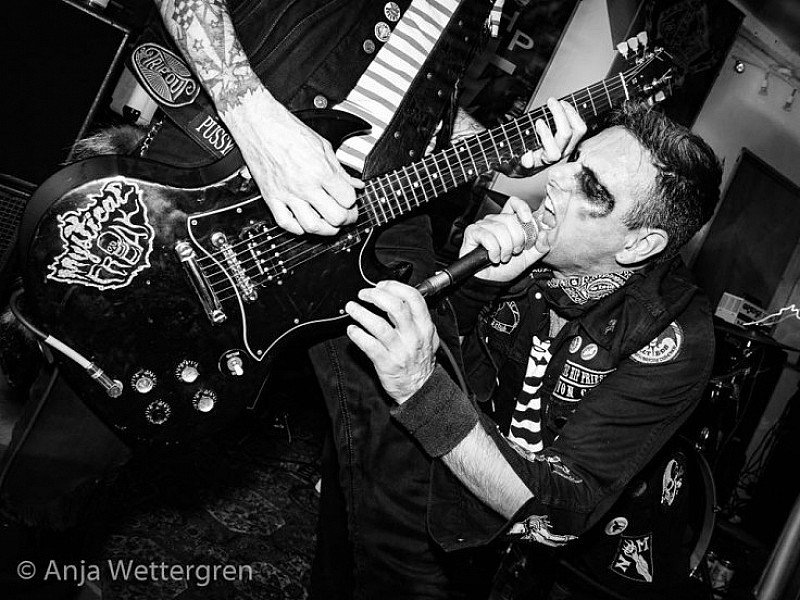 £5 adv.
‘The inbred white trash sons of Iggy P, Johnny T, Lemmy & Handsome Dick. An awesome mess of rampantly sexual, high action, hot assed, anthemic, sweat sodden Rock 'n' Roll’ were the words used to describe the band in an early review. 2016 marked the 10 year anniversary of The Hip Priests - 10 years since four (now five) scumbags first began preaching hate, filth, sex and contempt to anyone who’d listen in venues all around the globe, from London cellar bars to LA strip clubs.
After being snapped up instantly by Sweden’s Bootleg Booze Records to release their astounding debut album ‘Tight N’ Exciting’, their extensive releases now total three studio albums, a Japan-only compilation album, two EPs, a live album & to date nineteen 7” singles (including split releases with The Dwarves, Electric Frankenstein, Bloodlights and Pagans) – all released by various independent labels from all over Europe & the USA. In 2017 their extraordinary back catalogue of singles was collected on a mammoth 28 track compilation on double LP and CD.
Preaching their sermon of rock ‘n’ roll excess on numerous tours of the UK, Europe, and two USA tours, they’ve also made countless rapturously received festival appearances over the years including the final Speedfest and a triumphant set at Sjock Festival in 2017.
Rave reviews pour in for each and every release, ranging from ‘a band on top of their game & steps ahead of any of their UK contemporaries’ to ‘if you’re in any doubt about how good these bad boys are then you need locking up’.
The singles pretty much sell out in little time at all and they’ve amassed a pretty hard core fanbase of loons, collectors and misfits. The mainstream bullshit music world at large doesn't give a fuck but neither, in the main, do they...
2018 – What are YOU gonna stand for?