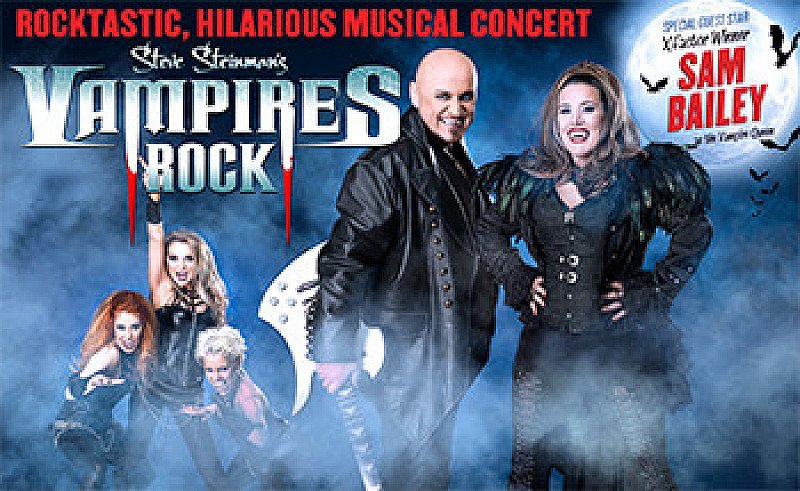 Sam Bailey is about to get her teeth into a real rocker of a show when she takes the role of the Vampire Queen in the hit touring musical extravaganza Vampires Rock Ghost Train for the 2019 spring tour.

For more than two decades, Steinman and his crew have returned to our stages night after night and delivered exhilarating performances that have been packed with energy, fabulous dance routines, spectacular special effects and of course, amazing music that has everyone up on their feet. Throwing just the right amount of fun and humour into his script ensures that Steinman always has the audience roaring with laughter.

This rock-tastic, hilarious, musical concert lives up to its rocking reputation. A tongue in cheek story, spellbinding cast, fangtastic fire routines, guitar gods and sexy vampettes take you on a ride through some of the greatest eighties classic rock anthems ever! Throwing just the right amount of fun and humour into his script ensures that Steinman always has the audience roaring with laughter. Including tracks from Queen, AC/DC, Meat Loaf, Journey, Guns n Roses and many more.

In 2019 X Factor winner Sam will be stepping into the shoes of legendary singer and actress Toyah Willcox who played the part for two years performing over 200 shows.

Sam will be joined on stage by creator and star of Vampires Rock Steve Steinman, plus a full cast of dancers, singers and musicians. For the past fifteen years Vampires Rock has played to more than a million people and has a growing army of fans who follow the show year after year as it tours in all the major theatres and concert halls country wide.

Prepare for a night of mischief and mayhem.