Posted 2 years ago by AN AUDIENCE WITH 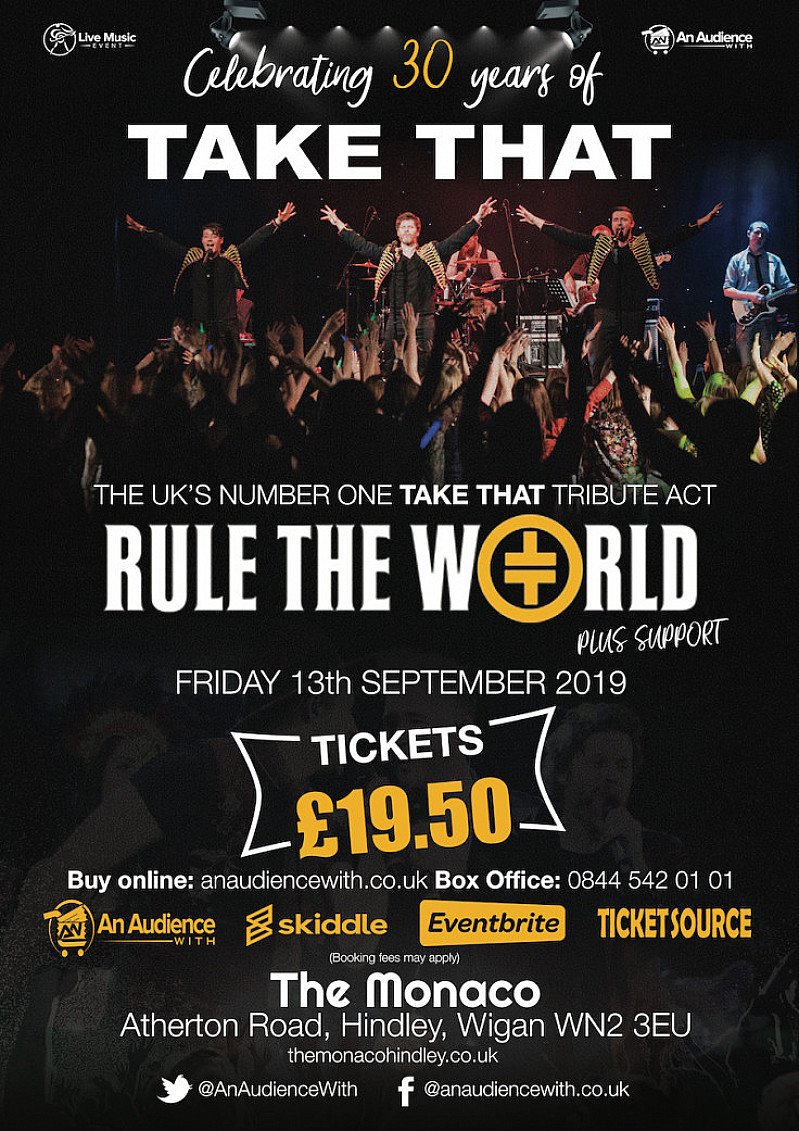 Rule The World have been recognised as the Number 1 Take That tribute act in the world. They recently appeared alongside Nicole Kidman, Hugh Bonneville, Julie Walters and the real Take That on BBC1’s ‘The Graham Norton Show’. After hearing Dan Maines speak, a stunned Gary Barlow said in amazement “He sounds like me!”. Gary then also praised the band, saying “These guys are good!”.

Rule The World have also been featured on ITV1′s ‘Daybreak’ and have had rave reviews from many people – including TV personality Ricky Tomlinson, Denise Van Outen, Jason Orange’s mother and Mr Gary Barlow himself – who tweeted the band to say he thought they are “brilliant”. They are the only Take That tribute show in the land to have ever been praised by Take That’s lead singer!

The band have performed at many prestigious events around the world – they’ve performed at a private party for ‘Coldplay’ and their management team, featuring many celeb guests. They have also performed with the cast of ITV1’s ‘Emmerdale’ and have been very fortunate to travel the world playing large outdoor festivals in Barcelona, Germany, Austria, Ireland and more. They have performed as a headline act on the Royal Caribbean cruise ships and have a big contract with Butlins Holiday Parks where they regularly perform alongside S Club, East 17, Damage, Gareth Gates and Bobby Davro. They have performed a 3 year theatre tour with their live band and backing dancers in many amazing UK theatres – including Manchester Palace, Edinburgh Playhouse, Leeds Grand and York Opera House to name just a few.

This full band show is an accurate portrayal of a Take That concert and features all the biggest hits including ‘Never Forget’, ‘Greatest Day’, ‘Back For Good’, ‘Relight My Fire’, ‘Everything Changes’, ‘Shine’, ‘Pray’ and many more.