Posted 8 months ago by Snizl for Cycles UK 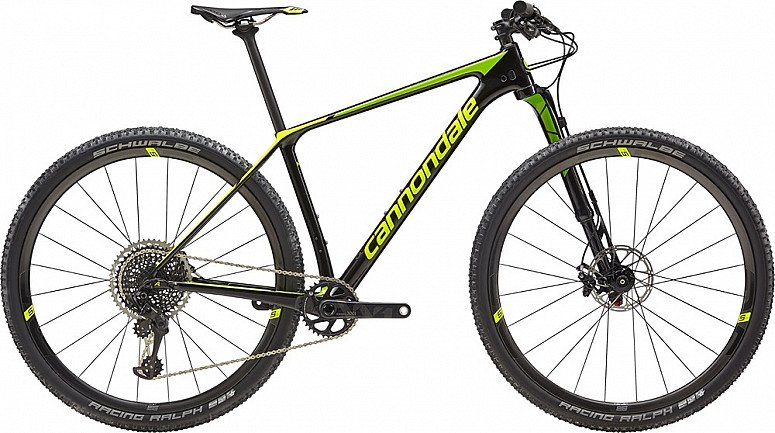 By Snizl for Cycles UK

The Cannondale F-SI Hi-Mod World Cup 2019 Mountain Bike lets you ride the same bike as the Cannondale pro team. The F-SI World Cup uses Cannondale’s Hi-Mod carbon which they reserve for their best bikes. It’s stiffer than their normal carbon mix allowing them to use less of it to achieve the same strength bike. The result is a frame that weighs in at just 900g.

Cannondale have paired Hi-Mod their carbon frame with a carbon Lefty Ocho that’s 300g lighter than the standard version. The F-SI is all about pushing the limits of what an XC hardtail can do. No other hardtail descends as fast, climbs as nimbly, or kicks harder, smoother.

The F-SI is super light but that’s almost a by-product of what Cannondale were aiming for with the F-Si. The Cannondale engineers focused on features that deliver real performance benefits out on the course. Features like Ai and OutFront, or improved compliance, or improved durability. That’s what wins races, not saving the weight of a few sips of water.

Cannondale’s AI tech features on a lot of their road and mountain bikes. It makes the backend of the bike asymmetrical with an offset drivetrain. This allows them to make the back end of the bike much shorter which translates to better acceleration, better traction and more agile handling.

The all-new Lefty Ocho fork floats through chop and steers through the choss like nothing else. Its extra-long fork offset pairs up with the F-Si’s new, slacker 69° head angle to create the OutFront geometry that gives you extra stability to charge the downs, with full XC agility on the ups. Helping the F-Si track perfectly through whatever you throw it into.

The F-SI is designed as an XC race bike and it does have a race orientated ride position but this bike also works great for any fast cross country riding. If you focus more on speed and distance covered rather than being gnarly then this could be the bike for you.

This bike is perfect for

World Cup XC racers, marathon and endurance racers, or anyone who just likes going really fast cross country. The Cannondale F-SI Hi-Mod World Cup lets you race on the same bike as the pros so there’s no excuses if you don’t win every race!