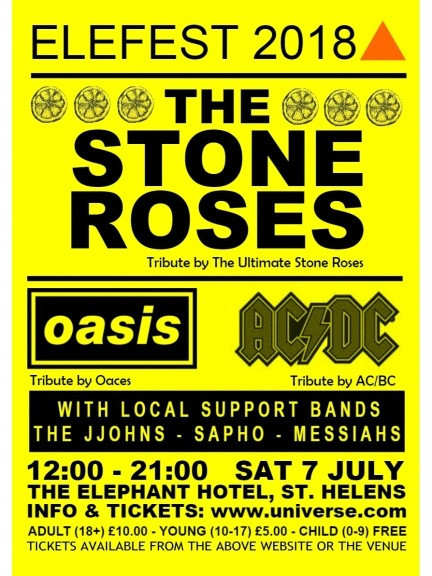 TICKETS FROM £5.00
Sandwiched between Liverpool and Manchester, Elefest is a lively little music festival on the grounds of The Elephant Hotel, Saint Helens.

The festival promotes a DIY philosophy and attracts some of the top upcoming talent from the North West each year. The main stage is situated inside an old barn that was used by travelers in the early 1900's. This barn gives off a massive cavernous sound and fronts the 300 or so people that turn out to party each year.


Now in it's third year, this festival is aiming even higher and has put together a lineup to boast.

Taking to the main stage at around 7.15pm are headliners The Ultimate Stone Roses. These guys have traveled the length and breadth of the country playing sell out shows and pleasing festival goers for years on end. A truly authentic tribute to The Stone Roses, these Manc lads know how to put on a show. Expect fisher hats, pints in the air and a harmonious eruption of "SENT TO ME FROM HEAVEN, SALLY CINNAMON, YOU'RE MY WORLD!"

Preceding the headline act are the UK's No.1 Tribute to Oasis, Oaces. Haling from Wigan but with the proper swagger that you'd expect from an Oasis show. If you're like us and cried when Oasis broke up then make sure not to miss another mega authentic tribute. Playing all the hits and perfecting everything from Liam's strait jacket stance to the little anecodotes that we all have come to love, you'll feel like you're watching the real thing.

Hitting the stage just after 4.00pm is a tribute the real pioneers of Hard Rock, AC/BC! Never before have we heard someone recreate the Ozrockers sound so closely before and just had to get them on the show. Seriously, have you ever heard anyone other than Brian Johnson pull off the 'Back in Black' vocals. Expect air guitars galore as their very own Angus shreds his SG in signature schoolboy uniform.