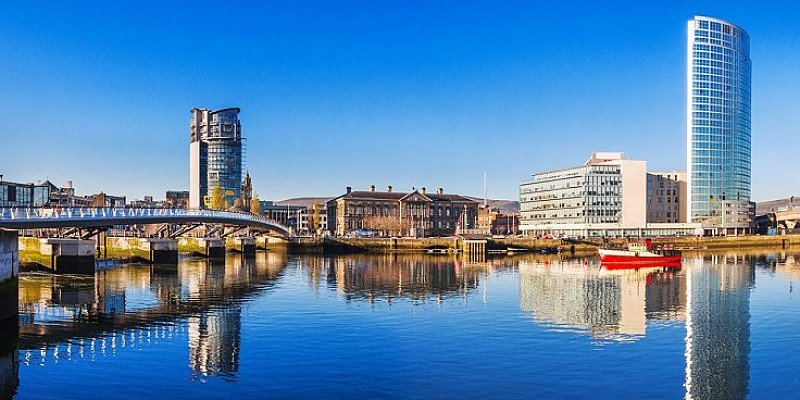 Belfast and the nearby Causeway Coast is ranked number one in Lonely Planet's Top 10 regions to visit in 2018. You can explore the birthplace of the Titanic this spring or summer with an overnight stay at the city-centre Radisson Blu Belfast. Now £109, this deal saves up to 54% on usual prices.

What's included
- Overnight accommodation in a Business Class Room, with buffet breakfast, for two, and late checkout until 2pm
- £20 dining voucher per room, per stay (food only)

When
This offer is valid for Thursday-Sunday stays from 14 June-31 August.

Hotel details
The 4-star Radisson Blu Belfast sits on the banks of the River Lagan in the revitalised Gasworks area, a 20-minute stroll from SSE Arena, Ulster Hall and the Botanic Gardens.

Head to the Titanic Quarter in the north of the city to learn about the history of the world's most famous ocean liner. The centrepiece of this regenerated area is the glistening star-shaped Titanic Belfast centre, which houses nine galleries telling the story of the ship and of shipbuilding in Belfast. CS Lewis Square, a public space commemorating the Belfast-born author with statues of his Narnia creations, is a 10-minute drive away. You can also take a tour of Crumlin Road Gaol and learn about its dark past. The Victorian-era prison, which closed its doors in 1996, is less than 15 minutes' drive away.

If you are looking to explore a little further afield, less than 90 minutes' drive from the city lies the famous geological wonder that is Giant's Causeway, Northern Ireland's first UNESCO World Heritage Site.

Much of Northern Ireland is "Game of Thrones" territory. The Dark Hedges, an avenue of beech trees that form an eerie tunnel, was used as a filming location for the Kingsroad, while Ballintoy Harbour, a picturesque fishing village, was used as a location for the town of Lordsport. Both are around an hour's drive away. The harbour is also five minutes' drive from the National Trust's Carrick-a-Rede Rope Bridge.

The hotel is a 10-minute stroll from Belfast Central railway station. Parking at the hotel is included Friday-Sunday and £9.75 for 24 hours Monday-Thursday.

Eating and drinking options at the hotel include the The Gasworks Restaurant and Gasworks Bar & Café.